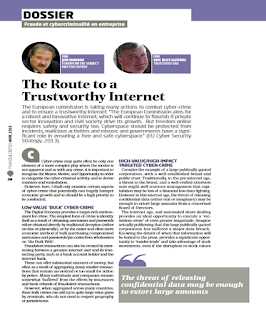 Toward a Trustworthy Internet with TrustSeed
Posted by TrustSeed at 11:05 AM No comments:

FOLLOW UP ON SPRINT PROGRESS:
The sprint involves members of TDL who have their own businesses and activities. It can make difficult to move forward effectively. However, we already managed to achieve some key milestones.

What have been done so far?
*  All the web services specifications are finished
*  The prototypes are designed and finished too
*  The membership agreement and the services agreement between the PM and TDL are realized.
*  The model of the traceability files for the PM registration and the signature online are defined.

What it remains to do:
*  The implementation of the use case in TDL Community in order that it be set up for the memberships 2015.
*  The dissemination of results.
*  The creation of documentary accounts of the PM on TDL via Microsoft Azur 365 Plateform (after the PM have signed on line all the agreements).
*  Set up a legal archiving server.

Posted by TrustSeed at 2:09 PM


Who was the winner?
TrustSeed won the TDL Sprint Competition and was awarded on the 7th of April 2014 during the TDL event in Vienna. 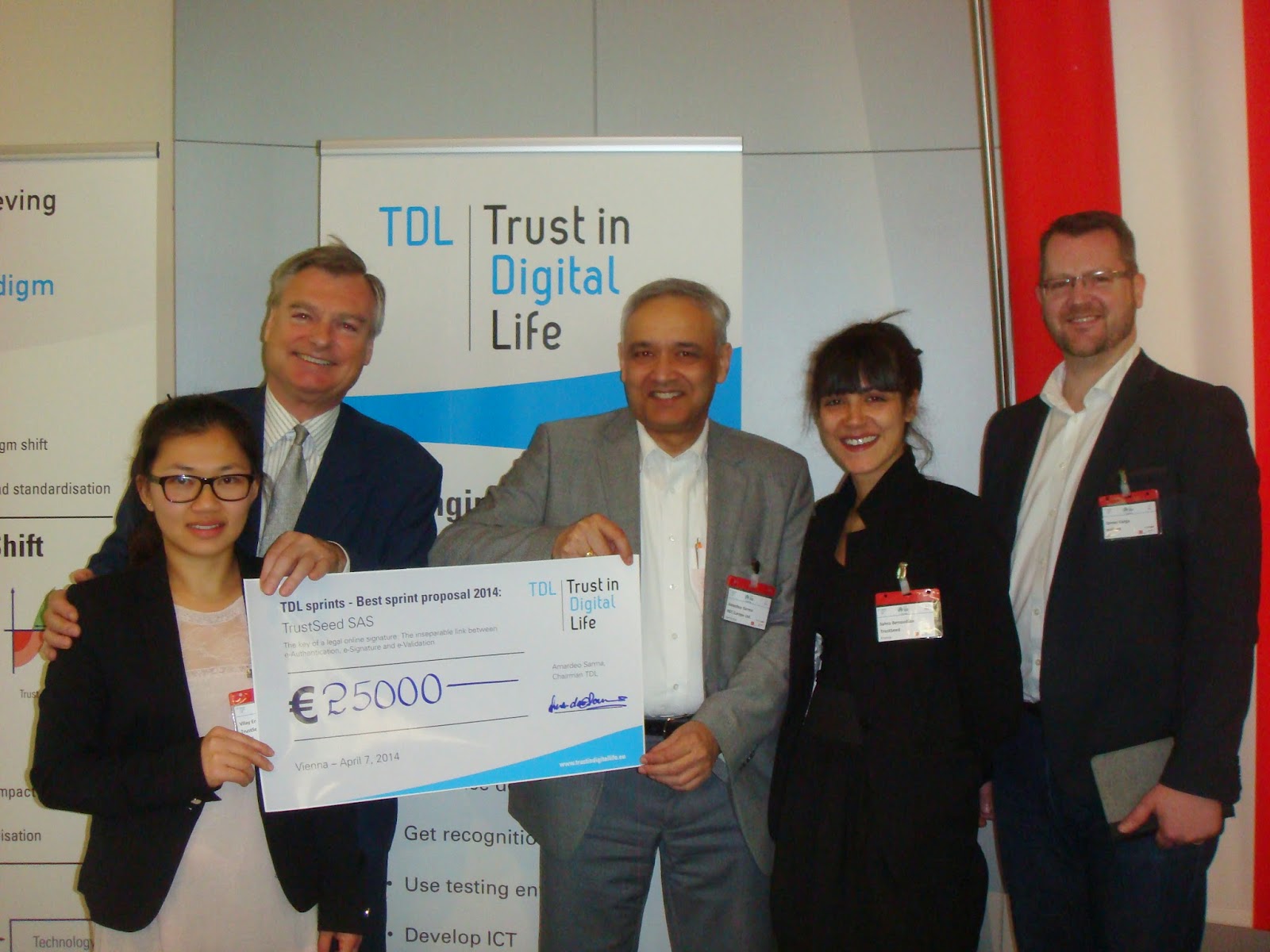 TrustSeed has presented a use case to sign legally on line the TDL membership agreement inside a secure and probative digital framework.

Our sprint proposal, called ‘The Key of legal on line signature: The inseparable link between e-Authentication, e-Signature and e-Validation’ is based on a role play between three different Trust Service Providers- ‘TSP’- that act inside a trustworthy architecture.
Role play

The first role is assumed by TDL and Microsoft as TSPs for Identification and Authentication
Their function are to realize the reliable registration and the authentication of the prospective members. The strong authentication is allowed by the Microsoft claim system on Azur 365 Plateform completed by the TDL check of the supporting documents uploading by the PM.

The third role is played by CertiWay as the TSP for validation
Thanks to the traceability files imposed to the TSP, CertiWay is able to control and to rate:
* The compliant registration of the Prospective Member
* The good execution of the online signature by the PM and also by the TDL board member (which has to countersign the membership agreement to be valid)
* The legal evidence, the data secure management and the privacy’s protection.

Trustworthy architecture
The framework where takes place the role play is a use case of three upcoming regulations:
eIDAS Regulation, COM (2012)0238 - Regulation on electronic identification and trust services for electronic transactions in the internal market
General Data Protection Regulation, COM (2012)0011 - Regulation on the protection of individuals with regard to the processing of personal data and on the free movement of such data
NIS Directive, COM (2013)0048 - Directive concerning measures to ensure a high common level of network and information security across the Union
Posted by TrustSeed at 1:33 PM

Email ThisBlogThis!Share to TwitterShare to FacebookShare to Pinterest
TDL SPRINT: WHAT’S THAT?


A brief reminder concerning Trust in Digital Life
The Trust in Digital Life (TDL) community, formed by leading industry partners and institutes, considers trust as a priority prerequisite.  Trustworthy ICT solutions must become a commodity enforced by citizens and law. The Trust in Digital Life community has  capabilities  to  resolve  the  issues  and  will  research,  pilot  and  promote  innovative trustworthy ICT environments and technologies.
The Trust in Digital Life consortium (TDL) has been working since 2009 on the operational implementation of an industry driven ecosystem stimulating the development, promotion and acceptance of trustworthy ICT. We have since developed a strategic research and innovation agenda (SRA) for trustworthy ICT for Europe, which has been taken up by the European Commission. The agenda includes the promotion and support of short projects, SPRINTS, to validate proof of concepts of technology, interoperability and trustworthiness.
TDL Sprint Concept
According to the Program Director TDL, Arthur Leitjens:  ‘In these sprints, TDL members collaborate in small projects lasting months to plan, execute and disseminate the results. Because of the low barriers, the sprints make it easy for small and medium enterprises and knowledge institutes to collaborate with large enterprises.’[1]
The purpose of a sprint is to validate new, innovative and trustworthy ICT in very short project cycles of approximately 3 months with three project stages: sprint design, execution, and dissemination. After a sprint is completed, the results are immediately disseminated publicly to a broad audience. [2]
TrustSeed and TDL
TrustSeed, a small French company created in 2002, is publisher of digital exchange security software.  We promote a new generation of online signature in SaaS (Software as a Service), combining digital validation and trust services in "cloud computing" to guarantee for the corresponding parties the security, confidentiality, conformity and probative value of all their digital document management.

TrustSeed met some TDL members and learned about TDL activities during an EMMA conference held in Amsterdam in June 2013. Then TDL invited TrustSeed with observer status to the TDL Workgroup meeting in Budapest (on 11th and 12th September 2013).
TrustSeed has officially joined the community of ‘Trust in Digital Life’- TDL- this year.

During the TDL meetings, TrustSeed met different kind of interesting companies (as well as large companies, SMEs or knowledge institutes) working on innovative trustworthy ICT solutions.
Among others, we discuss with Microsoft and TDL board members to share our views and to understand how some objectives could be reached by a combination of our respective skills and knowledges.


Due the sprint competition, we are now working together on some issues regarding authentication, safety, automated and probative use of the e-Signature.

[1] Extract from ‘A pragmatic approach to stimulate economic growth and trustworthiness of ICT’, article written by Arthur Leitjens on 14th April 2014 and published on the official TDL Blog. Can be consulted on :  http://tdloffice.wordpress.com/2014/04/14/trust-in-digital-life-a-pragmatic-approach-to-stimulate-economic-growth-and-trustworthiness/

[2]  For more details on concept of sprints, please visit the following page:
http://www.trustindigitallife.eu/tdl-sprints/concept-of-sprints.html
Posted by TrustSeed at 1:10 PM